George Hendrik Breitner started his artistic training at The Hague Academy in 1876. Under the influence of The Hague School painters and their new realistic and unromanticized approach to nature, Breitner developed a modern and impulsive style of his own and was soon considered an extraordinary talent by fellow artists. However, dissatisfied with the cultural climate in The Hague and drawn to the dynamic and inspiring city of Amsterdam, Breitner left The Hague and entered the Amsterdam Academy in 1886.

In that same year a group of young bohemian writers set up the literary magazine 'De Nieuwe Gids', in which they published their reflections on contemporary artists and passionately propagated the ‘L’art pour l’art' ideal in the visual arts and literature. The group, also known as the ‘Tachtigers’ included figures such as the painter Willem Witsen (1860-1923), the author Adriaan Roland Holst (1888-1976), the painter Jan Veth (1864-1925), the composer Alfons Diepenbrock (1862-1921) and others. The Tachtigers considered individual impressions far more important than the rendering of realistic details. All the major members were Amsterdam focused, thus changing the artistic scene from The Hague to Amsterdam and giving impressionism a city rather than a landscape orientation. Hence Amsterdam impressionism.

As an ambitious painter of modern life, Breitner, along with Isaac Israels (1865-1934) became one of the leading figures of the Amsterdam impressionist movement. In the eyes of his contemporaries Breitner was the artist who knew how to render those elements to canvas that defined the attractive elements of the city. As 'Le peintre du peuple’, he didn’t want to paint classical themes or make realistic historical paintings in an academic manner, foremost he wanted to depict everyday life.

Breitner was often found roaming through the streets with his sketchbook and camera to capture the daily lives of construction workers, labourers, maidservants and playing children. He captured what he saw with vigorous brushstrokes: a fleeting moment, a fragment in time. Conveying an impression was painting at its purest, the eye does the rest. The bustling city life would become a recurring subject in his oeuvre, of which the present lot is a fine example. Depicted is the Kalverstraat with an activity of people where Breitner created striking contrasts with bright blue, white and red colours. Breitner brilliantly translates a swiftly passing ordinary moment of street activity in a beautiful painterly unity of colour and form. His cityscapes of Amsterdam - such as the present lot - were highly sought after and people flocked to buy these pieces. 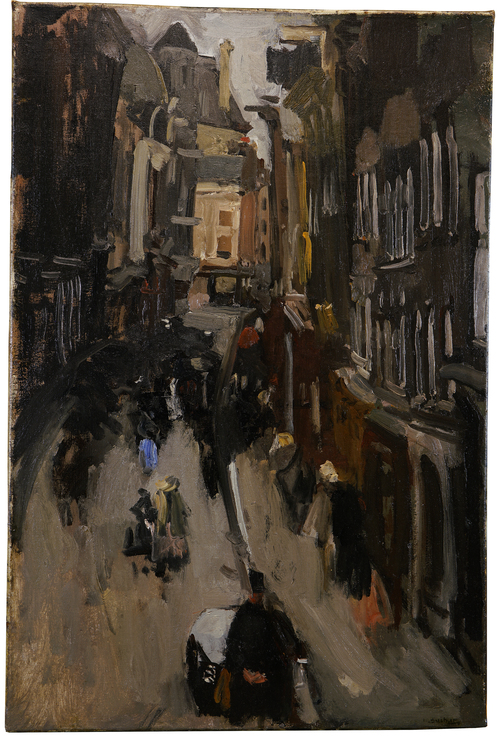 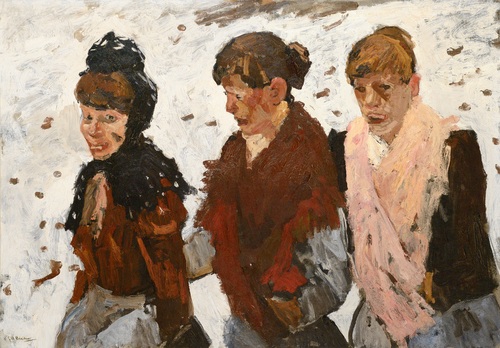 Please note that all bids are binding. If you win a lot, you are obligated to pay for it. The bid price does not include shipping and auction fees.